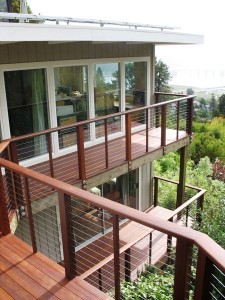 The view of San Francisco Bay is the prime feature of this Mill Valley (Marin County) location and we wanted it to be as unobstructed as possible. We ruled out tempered glass which requires regular cleaning and Cable Rail seemed like the best option. Our client initially wanted a composite deck but after he saw ipe he realized that the stunning appearance of this exotic hardwood could not be passed up.

Ipe is in my opinion, among the best deck woods in the world. It comes from South America, is highly rot resistant, and is 80% harder than oak. Ipe is also one of the most expensive deck materials both to purchase and install. Building a deck with Ipe is literally like building a large piece of furniture. It takes about twice as long to install a deck with ipe versus redwood or composite decking.

With wood this beautiful, the last things we wanted to see were screw holes in the floor. Of course we used the Deckmaster Hidden Bracket in most locations. However, due to the design of the understructure, many deck boards sat directly on top of beams which left no access for Deckmaster Brackets. There were also many areas on the rail that needed screws. In all these areas we elected to hide our screws using ipe plugs. This is quite time consuming because we had to pre-drill, countersink, drive the screw and then glue in the plug. The results however were well worth the effort. 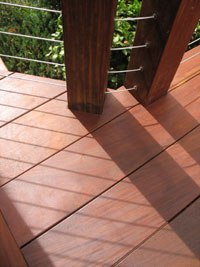 Building with ipe requires every cut to be precise. It really tests the skill of the builder to notch around posts and other obstructions. Some of the deck boards on this project took three hours to cut and install. We just had to keep fussing until they came out right.

There are a number of Cable Rail manufacturers. We selected a product by Feeney (http://www.cablerail.com/) because it seemed to be the most complete system and readily available at our local lumber yards. They start with marine grade stainless steel and include all the components required to make installation simple. Simple does not mean easy though, especially when building with ipe. Just drilling through the 4×4 posts gave us fits. Several drill bits ended up looking like ornate pieces of pasta after the ipe twisted them up.

There has been some controversy about how to make cable rails comply with building code regulations. The cable must be 1/8” diameter and spaced no more than 3” apart. When a 50 pound weight is hung from the cable, the space between cables may not exceed 4” at any point.

One thing I really like about ipe is that there are several styles of shaped rail caps available. They look and feel like fine furniture and nobody can resist reaching out and their hands along the cap.